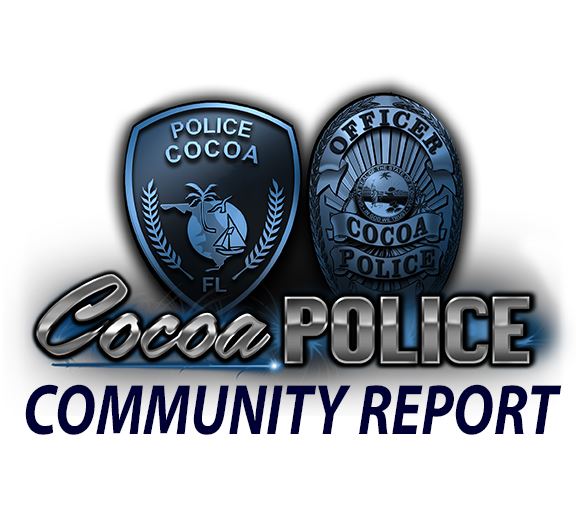 Crime is Down in Cocoa

Data submitted to the Florida Department of Law Enforcement for 2021, shows crime is down in the City of Cocoa. The annual Uniform Crime Report shows an 11.1% drop in the overall crime rate for the city in 2021, with 9.6% fewer crimes reported. A closer analysis shows violent crime dropped by 17.3% and property crime went down by 8.1% compared to 2020. Domestic violence related crimes also declined by 15.7% compared to 2020. The clearance rate for these reported crimes, was 30.2%, which is above the national average. “We are pleased with the decline in property crime and violent crime in our city,” said Chief of Police Evander Collier IV.  “Crime was up significantly when I took over as Police Chief on April 29, 2021.  I knew it would be a challenge to reduce crime.  Our success is a direct result of our new intelligence led policing strategies, the hard work of all the men and women of the Cocoa Police Department and the dedicated community partners and citizens that joined us in driving crime down under my leadership during the last 8 months of 2021. We are just beginning. It is imperative that we hire more police officers to maintain continued crime reductions, improve safety on our roadways by reducing traffic crashes, and continuing to bring in new partners to help us move forward.”

All law enforcement agencies in the State of Florida are required to report accurate crime data each year, and mid-year. The data submitted is used to help provide a barometer of the crime conditions within a geographic jurisdiction. The official crime report from the Florida Department of Law Enforcement is expected to be published in the coming months.

During the first quarter of 2022, the Cocoa Police Department held 4 Chief's Community Walks in local neighborhoods throughout the city.  The walks were held in Cocoa Bay, Pineridge, Amherst Court, and Bristol Drive and Prospect Ave. These walks are meant to help connect officers and police department leadership with local residents in a non-enforcement environment.

During each walk, officers and members of the department's command staff go door-to-door to meet the residents and ask if they have any issues or concerns that can be addressed. Many neighbors shared concerns about traffic and code violations. The concerns were documented and followed up with appropriate actions such as increased traffic enforcement, opening of new code enforcement cases, proactive enforcement for illegal drugs or other concerns. The goal is to have at least two walks in different neighborhoods each month.

ern Shepherd from Texas is the newest member of the CPD K-9 Unit. K-9 Maverick began his patrol duties Tuesday evening following his official certification as a patrol dog. He is assigned to K-9 Officer Dan Rhoades.

K-9 Maverick is taking over the patrol duties of K-9 Bear, who is now officially retired after nearly 8-years of dedicated service to the Cocoa Police Department and the citizens of Cocoa.  K-9 Bear, also known as America’s Top Dog for winning a nationally televised competition against police k-9 handlers from around the country, was highly skilled in tracking fleeing suspects, locating missing persons and finding illegal drugs and evidence in criminal cases. K-9 Bear was also part of the SWAT team.

Last year, K-9 Maverick was donated to the police department by the Brevard Kennel Club. He has been training with Officer Rhoades since he was a puppy.

Police K-9 teams receive the most amount of training of all the disciplines in police patrol work. It totals 480 hours and involves obedience control, apprehension, search work and tracking, along with additional hours for scent detection for drugs. On Monday, K-9 Maverick passed all the required skills to be dual certified for patrol work and drug detection.

-9 Bear began his work at the Cocoa Police Department in 2014 and served as a dual- certified patrol K-9. He underwent training to track fleeing suspects, locate missing persons, as well as find illegal drugs and other evidence in criminal cases. K-9 Bear also worked with the CPD SWAT team.

K-9 Bear and K-9 Officer Dan Rhoades, worked closely together for 8 years proudly serving the citizens of Cocoa and the surrounding areas. During his years at the CPD, K-9 Bear and Officer Rhoades created a strong partnership that has proven beneficial in keeping our community safe. He assisted in recovering countless amounts of illegal drugs and removing them from our streets. Many fleeing suspects surrendered peacefully just hearing K-9 Bear’s bark. K-9 Bear's exemplary skills and dedication proved to be a valuable asset to the department and the community.

K-9 Bear and Officer Rhoades special partnership was featured on America’s Top Dog, a television series on A&E Network in 2019. The duo participated on the show where the most elite police K-9 teams from around the country have their skills tested to mimic the real life challenges they face daily on the job. A series of tasks test the competitors skills in speed, agility, scenting ability and teamwork while working through an obstacle course.

Though K-9 Bear’s mission was to protect the community, his duty was to ensure both he and Officer Rhoades safely finished each shift. K-9 Bear was not just a tool to help his human police officer. K-9 Bear was, and will always be, a loyal friend.

Delta Squad officers responded to Sam’s Club for a report of a missing female who wandered away from the store. The caller provided information to officers that the 67-year-old woman with Alzheimer’s wandered off and had not been seen for approximately 1 hour.  Delta Squad officers with assistance from Community Engagement Unit officers immediately began canvassing the area. Officer Amanda Torello provided constant communication and a description of the missing woman along with a photograph to all responding officers.  Community Engagement Officer Eric Cronin found the woman walking north on Townsend Road. She was safely returned home and her family was provided information about Project Lifesaver. Project Lifesaver is a program designed to assist in the tracking and locating of persons with Alzheimer’s and related disorders such as Down’s Syndrome or Autism. A personalized radio transmitter bracelet is worn by participants of this program, and with the use of the Sheriff’s Aviation Unit and patrol officers, participants are quickly located if they should become missing. To learn more call 2-1-1 or visit the website at http://brevardtriad.org/project-lifesaver/.  Well done Delta Squad and CEU officers for making a difference in the outcome of what could have been a tragedy.

In September, Chief Collier created the Community Engagement Unit. It is staffed with a lieutenant, sergeant, corporal and three officers. The goal of this unit is to promote and foster collaborative partnerships with the citizens of Cocoa and to continue to build trust, transparency, and improve relationships with the community.  “I believe it is important to have these resources and these officers more accessible to the public,” Chief Collier stated.  “My goal from the beginning has been to be in the community with the people. This center facilitates that and more.”

The Community Engagement center will include the offices of Community Engagement Unit (CEU) officers and leadership as well as the offices for code enforcement. The officers of the community engagement unit are focused on connecting with the community through building positive relationships. This unit also provides public education regarding personal safety and crime prevention.  Officers also serve as problem solvers to connect people with social services where needed. The unit utilizes tools such as the community outreach trailer equipped with food service space, and audio-visual capabilities.  K9 Copper is another outreach tool that enables officers to reach people in a friendly and neutral environment designed to build and enhance positive relationships with law enforcement.   The unit works with local area non-profits to support outreach programs such as the Cocoa Police Athletic League, Cops and Kids Summer Camp, Shop with a Cop, Back to School Supplies Drive, Space Coast Police K9 Competition, Holiday Food Drive and Thanksgiving meals giveaway, and the Christmas Toy Drive.

Code Enforcement’s mission is to foster and maintain the feeling of a safe and healthy environment for those living, working and visiting the city. Code enforcement officers are civilian employees that work to preserve property values and remove blight throughout the city by enforcing the city’s Code of Ordinances. The result of the combined efforts will ultimately increase the safety of the public and improve the overall quality of life for all residents and visitors of the community at large.

The center will also provide space for community members to host pre-planned events and meetings coordinated through the Community Engagement Unit.

ry, Lt. Mike Dellatorre successfully completed the University of Louisville’s Southern Police Institute’s Command Officers Development Course. Lt. Dellatorre spent more than four months studying command level instruction that included policing in the 21st century, strategic management and teambuilding, ethics and innovation, prevention and investigation of police misconduct and more. The course involved 400-hours of high-level instruction that will now be applied to his current leadership roles at the Cocoa Police Department.  “I’m very proud of Lt. Dellatorre’s accomplishment and look forward to his continuing dedication to the highest level of professionalism and integrity in his service to the citizens of Cocoa,” said Chief Evander Collier IV.

Corporal Ralph Perrone has served the city as an auxiliary officer and corporal for many years and also volunteers countless hours to serve our agency and our community. We are honored to present him with his second Distinguished Service Ribbon and a Volunteer Award.  Thank you Cpl. Perrone for all you do for us. You make us a better community! 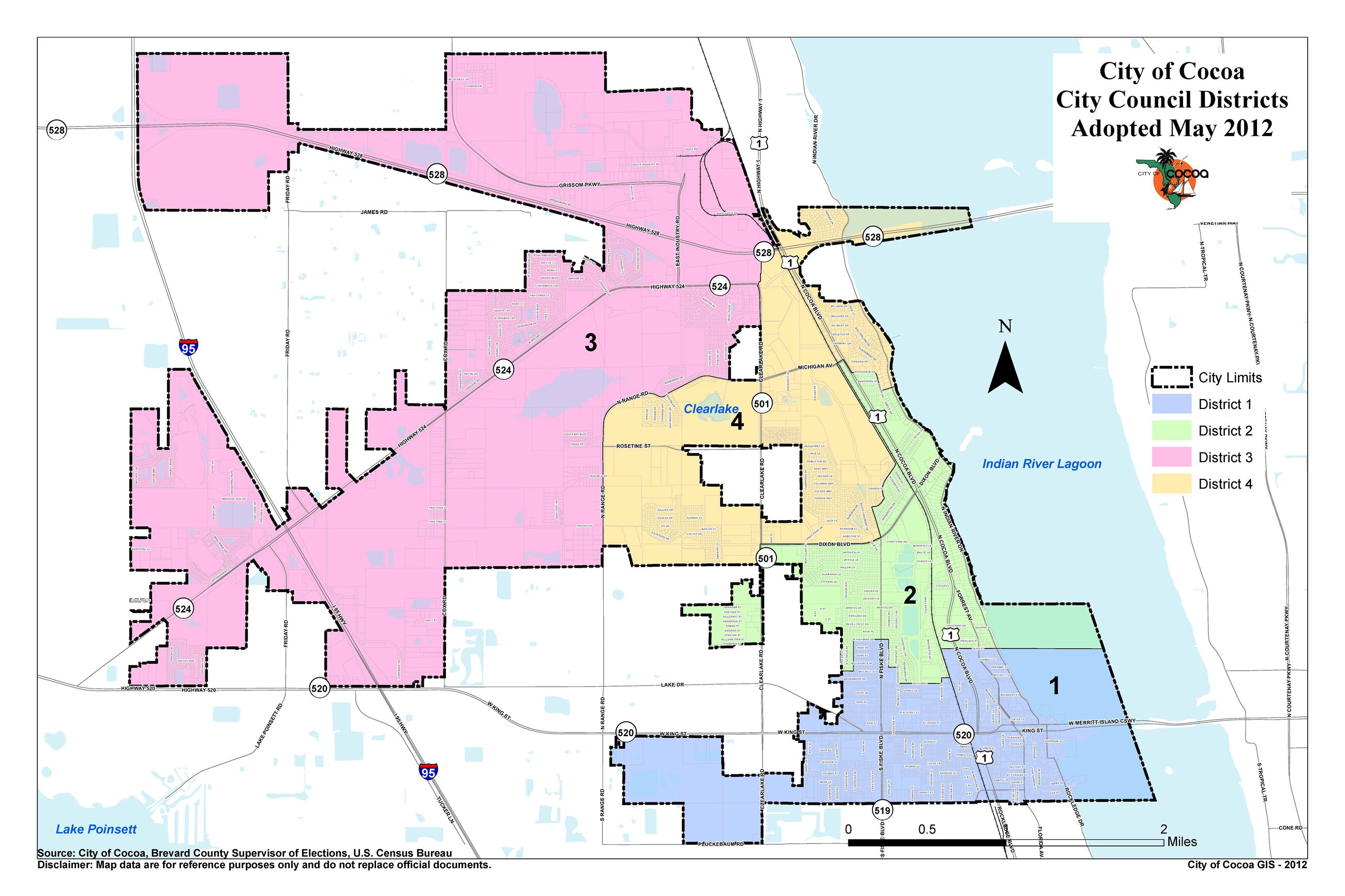 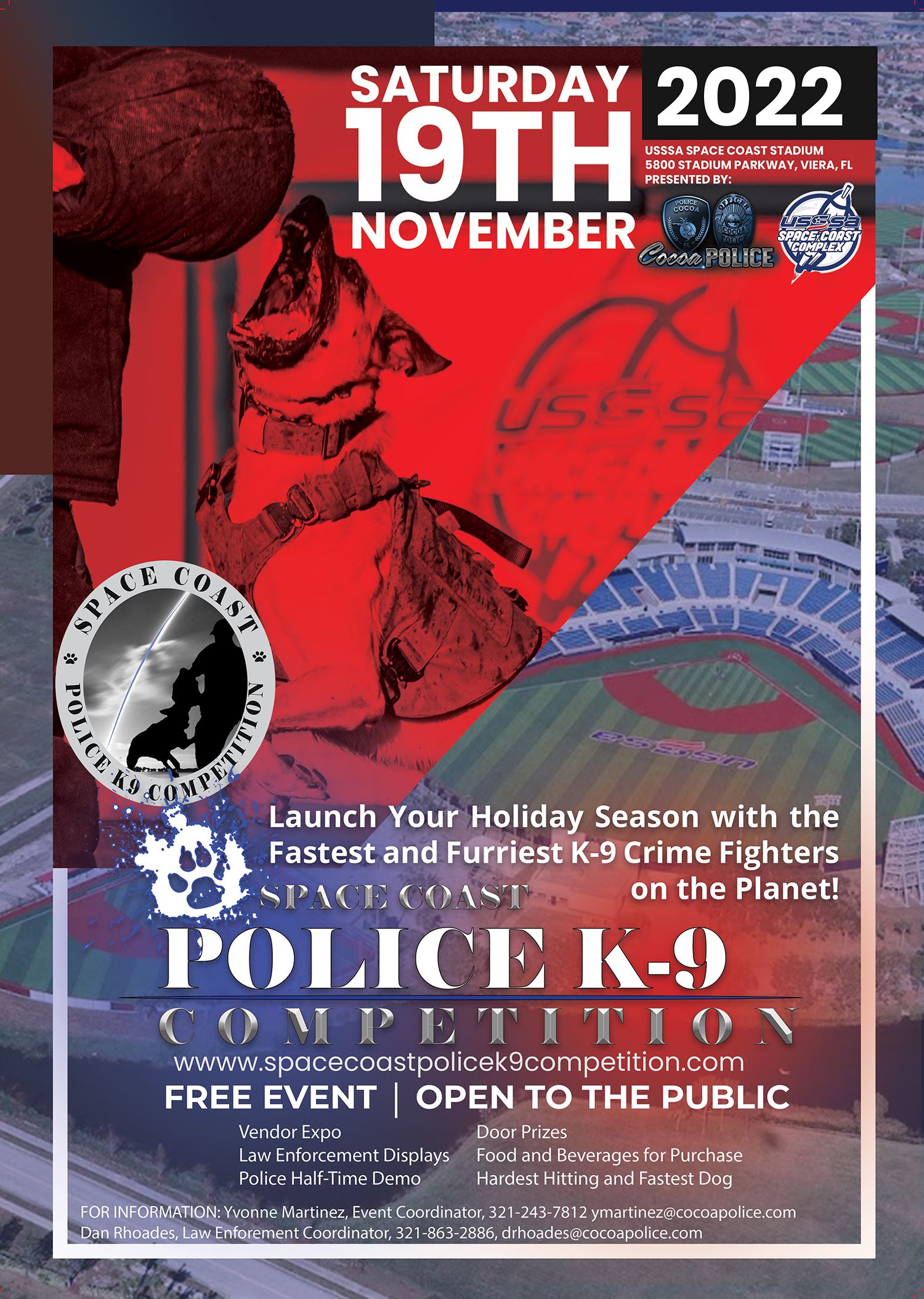 Department is partnering with United States Specialty Sports Association (USSSA) to bring you the 2022 Space Coast Police K9 Competition. This year the event will be held at Space Coast Stadium on Saturday, November 19, 2022.  Mark your calendars and plan to join us in November! Interested sponsors and/or vendors should contact Yvonne Martinez, 321-243-7812 ymartinez@cocoapolice.com.

The best way to prevent yourself from becoming the victim of a crime is to do things that will make yourself and your property less vulnerable. This is what we call hardening the target. Your home or vehicle is a target for would-be thieves or criminals who wish to cause harm.  Here are some ways you can "Harden the Target" and protect yourself: